The Chicago Architecture Biennial debuted in 2015 as “The State of the Art of Architecture,” a three-month-long showcase of productions and exhibitions by an international group of architects, designers, and professionals that took place throughout the City of Chicago. 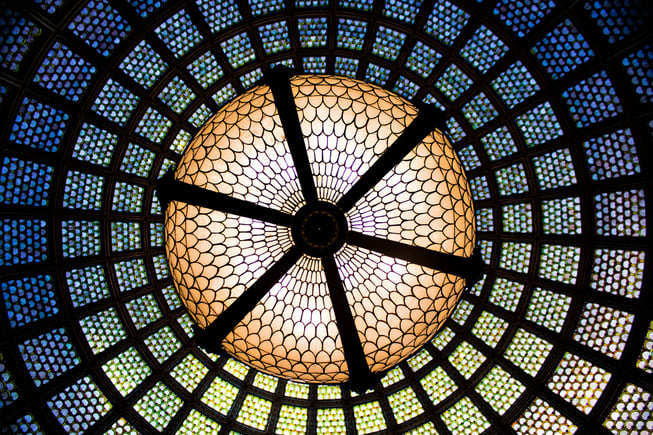 Coordinated in part by the Chicago Department of Cultural Affairs and Special Events, The Biennial drew over 500,000 visitors during its inaugural run and as North America’s largest event of its type, it provided a forum for exploration and commentary on contemporary architecture’s recent innovations and most pressing issues.

As the 2017 Biennial approaches, here is a look back at the event and the plans for the future.

Biennial Found a Home at the Chicago Cultural Center

The Biennial was headquartered at the Chicago Cultural Center, a historic building and the site of Chicago’s first public library. The Beaux-Arts building, completed in 1897 and home to the largest Tiffany glass dome in the world, functioned as a community center and home for exhibitions and tours and will return as the nexus of 2017’s event.

Participants installed works in and around the Cultural Center that engaged playfully with the historic structure, including an exhibit titled “Chicago, How Do You See?” by design collaborative Norman Kelley, which consisted of vinyl cutouts of city windows placed in the Cultural Center’s windows for the duration of the event. The graphics presented visitors with glimpses into the perspectives of Chicagoians and the Biennial's curators and referenced well-known Chicago architecture as well as the everyday windows of city residences.

“Randolph Square” was installed by Mexico City-based design team Pedro&Juana and featured movable lighting and seating in the Center’s Randolph Street entrance, evoking a “living room in the city" and inviting vistors to linger and manipulate their surroundings.

Other exhibits focused on scale and scope. The Cultural Center was also home to work such as Tomás Saraceno’s “spider architects,” a collection of spider webs lit to show their intricacies and “Architecture is Everywhere” by Sou Fujimoto Architects, which used everyday objects such as staples to illustrate how architecture exists in the enviornment at a micro-scale.

The Cultural Center will house legacy installations during the Biennial as well as new galleries, programming centers, and two collaborative exhibits in the large halls.

The event hosted over 60 participants and a myriad of installations, lectures, and events scattered across the city's neighborhoods. The following is a sample of the Biennial’s numerous offerings:

2017 Biennial Scheduled to Open in September

The 2017 Biennial will be taking place from September 16th, 2017 through January 7th, 2018. Titled “Make New History” with artistic directors Sharon Johnston and Mark Lee of JohnsonMarklee, the event will again host over 100 participants in conversation around contemporary architecture and its relationship to the past and its status as a built art form in the present. More information on the participants announced for the upcoming event can be found on the Biennial’s website as the opening date nears.

As was the case in 2015, the event remains free to the public for 2017. Unique to this year, the opening of the event also coincides with EXPO Chicago, the International Exhibition of Contemporary and Modern Art located at Chicago’s Navy Pier.

The vision for this year's event groups works into four catagories: "Building Histories", "Image Histories", "Material Histories", and "Civic Histories" that explore a range of topics from the history of architecture models, the presence of architecture in mediums such as wallpaper and the adapation of the architectural medium to create new visual stories, to an exhibit that will explore the color beige - describing the universe as a "cosmic latte".

New to this year's event includes anchor sites throughout city neighborhoods. These locations will serve as community centers and extend the Biennial's outreach. You can explore unique programming at the Beverly Arts Center, the DePaul Art Museum, the DuSable Museum of African American History, the Hyde Park Art Center, the National Museum of Mexican Art, and the Nation Museum of Puerto Rican Arts and Culture.

Like the inaugural event, “Make New History” will likely spark its own collection of exhibits, performances, commentary, and conversation in the industry and beyond. Look for our follow-up discussion of this year's event in September, and read more about Burnham's involvement with historic Chicago buildings.