For 90 years, Cushing has been a Chicago printer with an international reach, first opening as a blueprint shop in 1929. In the decades following, the business grew to include film

Cushing retains its close ties to the architecture and construction community in the present day by offering wall graphics, construction fence wraps, and building signage. In recent years, they have added wayfinding and directional signage and more recently a suite of ADA signs for buildings to their offerings.

Burnham’s Code Team often consults on Americans with Disabilities Act (ADA)-compliant signage, including exit and wayfaring signage, and we frequently see violations during our code compliance reviews. We’re excited to partner with Cushing, to address some of the most common signage mistakes in this post as well as in upcoming presentations and collaborations.

In the coming weeks, we’ll delve into frequently asked questions customers and prospects ask of both our companies. Additional blog topics will include egress communications and informational versus directional signage.

The ADA’s Title III prohibits discrimination by private entities operating as places of public accommodations covering accessible signage including exit doors. The rules implementing the ADA, the 2010 Standards for Accessible Design (2010 Standards), incorporate the 2004 ADA Accessibility Guidelines (ADAAG) that contain new construction, alterations accessibility scoping and technical requirements. See if you can identify the violation of the ADA’s requirements in this picture. 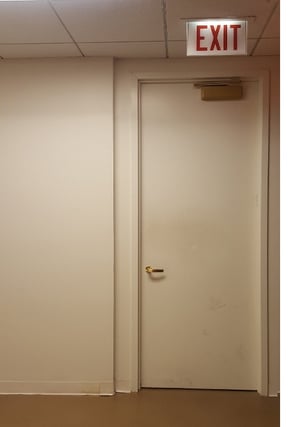 ADAAG § 216 specifies locations and types of ADA compliant signs required to be posted, with the exception that signs are not required for temporary conditions of seven days or less. The most common conditions are highlighted below.

The requirements for exit doors signs are included in the provision governing signs for means of egress.

ADAAG § 216.4.1 further specifies signage requirements at doors to exit passageways, doors that are part of the exit discharge, and exit stairways. These requirements advise that signs at all exit doors must also include a tactile sign containing raised characters and Braille lettering; so exits must have both visual and tactile characters. It is acceptable to have two separate signs with visual and tactile lettering. 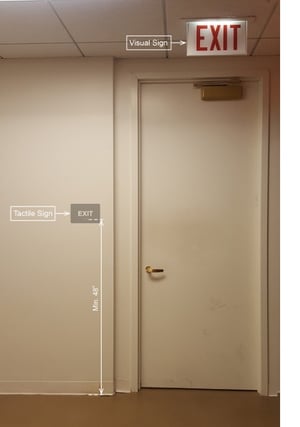 Be Aware of the  Difference Between Local  and Federal Requirements

It is important to note that not all local  jurisdictions require tactile signs at exit doors.

Chicago, where Cushing and Burnham are  headquartered, does not have a tactile sign  requirement for exit doors. However, if exit doors  do not have tactile signs - even if the local municipality doesn’t have a rule - one is in violation of the federal ADA requirement and can potentially be subject to a Department of Justice enforcement action, even if such signs aren’t locally mandated.

At Burnham Nationwide, we specialize in conducting plan reviews for ADA and other code compliance. Contact us for a consultation on future plans or for site services on your active projects.