As the culture of workplaces has changed, office design has adapted to provide more spaces for collaboration and varying types of meeting space make up more of a typical office suite now than at any time in the past. 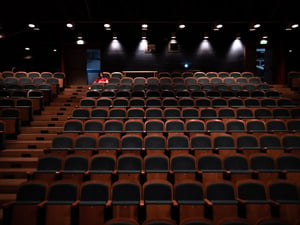 When the new Chicago Building Code (CBC) went into effect in August of 2019, a prevailing concern was the factors for calculating the occupant load of meeting rooms. In the previous CBC, the allowed load factor used for meeting rooms was 20 square feet/person. Per the new CBC, this was determined for each space based on its use per Table 14B-1004.5, i.e. tables and chairs, chairs only, or concentrated. A typical meeting room furnished with tables and chairs shall be calculated at 1:15; chairs only at 1:7. The increase in calculated load for spaces that are intended to be used by the same employees that work in offices or at workstations can quickly add up to well above the actual number of persons present on the floor.

Initially, it was assumed that additional increases in exit capacity per CBC 1005.3 would help to offset the higher calculated loads, but for many projects this did not turn out to be the case. Legislation amending portions of the municipal code was introduced to City Council on September 9, 2020. The amendments were passed and went into effect on October 7, 2020.  Among these were some new rules for determining occupant load in Section 14B-1004. The newly added sections, which are understood to have been based on a Building Permit Policy by the City and County of Denver,  offer a logical middle ground between the relatively less stringent requirements of the pre-2019 code while providing a realistic method for calculation of occupancy.

In Business, Industrial, and Mercantile use groups, the new rules allow spaces used for assembly purposes like meeting and conference rooms, work rooms, or pitch rooms to use reduced load factors in accordance with the new sections 14B-1004.10.2.1 through 14B-1004.10.2.3.

For such rooms up to 150 square feet, section 14B-1004.10.2.1 allows the load factor to be used applicable to the predominant non-assembly use of adjacent spaces within the same suite and story. For example, the 100 square feet per person factor can be applied to a 146 square foot meeting room in a typical office floor that is otherwise predominantly business use at the 1:100 factor. Likewise, a small meeting room in a university building (classified as a Business occupancy) on a floor that is predominantly occupied by classrooms (1:20) can use the classroom factor.

The new section 1004.10.2.1.2 allows spaces more than 150 square feet but less than 750 to use the predominant load factor as for rooms 150 or less, but with an additional requirement. The aggregate gross area of all such spaces cannot exceed 10% of the overall area on the floor or within the tenant space.  Two lounge areas adjacent to an open office can use the same load as the office, provided that the area of both lounges combined does not exceed 10% of the suite or story.

Finally, for spaces used for meetings, conferences or training and only by occupants employed within the same building, the newly added section 14B-1004.10.2.3 permits the 20 square feet per person factor normally used for classrooms to be applied. Careful consideration must be taken before using this reduction. For example, a space intended as a pitch room for presentations to clients would not meet the criteria for this reduction, since it will frequently be occupied by people coming from outside the building.

For Assembly Use Spaces that exceed 750 square feet such as a break room or cafeteria, the appropriate assembly factor would need to be applied even when the office use is the primary occupancy.  For example, a break room with seating would be calculated at 1:15. Some rooms may be intended to serve multiple functions to provide more flexibility.  In this case, the most restrictive factor should be used.

The text of the newly adopted legislation is available as a PDF here. The new additions to 14B-1104 can be found on pages 18 to 19.