Transportation researcher Anthony Downs introduced his traffic equilibrium theory, the Law of Peak-Hour Expressway Congestion (Law), in a 1962 paper. Citing that “on urban commuter expressways, peak-hour traffic congestion rises to meet maximum capacity", the Law is applied to urban roads as whole: no matter if a road is widened or additional lanes are “built in and around American cities, you can’t stop cars from jamming them up.”

Congestion pricing, implemented in cities such as London and Stockholm, aims to decrease road congestion with tolls on single-occupancy vehicles (SOVs) or commercial vehicles driving on specified roadways. Though met with controversy, the practice and more intensive measures - such as prohibiting vehicles entirely in certain city sectors - currently coexist with efforts to bring better infrastructure and pedestrian-friendly development for a more sustainable, transit-focused city.

In this post, we’ll explore some of examples of these driving regulations currently in practice and New York City’s own exploration of the congestion pricing model.

Some European cities are seeking to ban cars from their central districts - either in total or in part - as part of climate action plans and long-range planning initiatives.

In October 2017, Paris banned cars for an entire day in the inner city. While not Paris’s first car-free event, it followed an announcement that all diesel vehicles will be phased out in Paris by 2024. Mayor Anne Hidalgo’s pollution-reduction efforts including the forthcoming diesel ban, pedestrian-only Sundays once a month along the Champs-Elysees Avenue, and expansion of the city’s successful bike share program established in 2007.

Paris’s efforts are part of a larger goal to ban all fossil fuel cars in France by 2040 as both a long-term sustainability plan and a method of reducing smog. Paris used alternating-day traffic bans and free access to public transportation to counter air pollution in the past, but the move toward a permanent phase out of fossil fuel cars for entirety of France represents a fundamental shift.

Oslo, Norway’s plan will ban all cars entirely from the city center by 2019 and build more than 35 miles of new bike paths, along with mass transit improvements. The ban will be permanent and is one of the most ambitious movements toward car-free cities in Europe due to its timeframe.

Promoting cycling and public transit as car alternatives, Oslo is prioritizing pedestrian access, reducing pollution, and investing safer streets - key incentives to make commuters more willing to give up their cars. Madrid is also planning to eliminate cars in over 500 acres of the city by 2020, one of the largest projects of its kind in Europe, focusing on older, more polluting vehicles.

Brussels, Belgium - with its notorious congestion - is home to the second largest car-free zone in Europe. With portions of the Grand Place, stock exchange, and the major shopping street Rue Neuve historically pedestrian-only, the city now seeks to expand its pedestrian areas to include more of its main streets.

Brussels experienced a massive car-centric planning shift in the 1960s and the core of the city continues to grapple with the impact of the redevelopment. Eliminating additional vehicles from dense areas of the city will address air quality issues within Brussels according to advocates.

The city of London favors congestion pricing as a way to divert traffic.

The city’s congestion charge, known as the T-Charge, is a £11.50 daily fee for driving a vehicle within the specified charging zone between 7:00 am and 6:00 pm, Monday through Friday. The charging zone includes central London within in the inner ring road and was introduced in 2003, one of the oldest and most successful examples of congestion pricing.

The charging zone has expanded since 2003, and though not an air pollution control measure, limiting traffic makes downtown areas safer for alternative modes of transportation such as cycling. 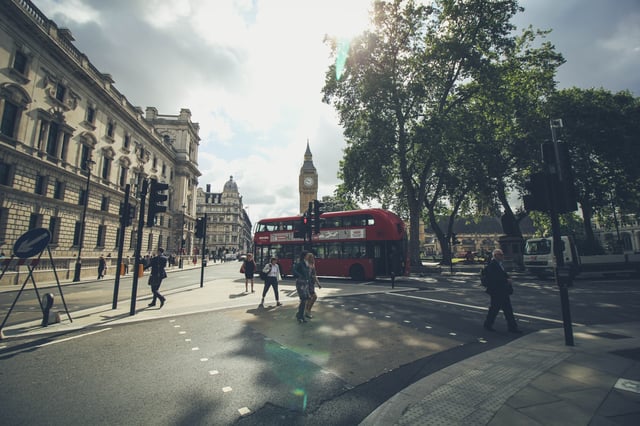 Gothenburg, Sweden has also successfully implemented a congestion charge with a measurable impact in traffic reduction. Since its introduction in 2013, the city has seen a 12 percent decrease in traffic and an increase in public transit use.

What makes Gothenburg’s toll system unusual is that it’s an example of a congestion charge program in a smaller city with less existing transit coverage. With wider job distribution and lower population density, Gothenburg is more car-dependent than Stockholm (also with a congestion charge zone). 55 percent of Gothenburg residents approved of the charge a year after it was introduced, and it continues to be a successful way of increasing public transit use within the city.

In January, the Fix NYC Advisory Panel released their 2018 Report (the Report) calling for congestion pricing in Manhattan.

The effort isn’t the first time congestion pricing has been proposed, but the Report draws heavily on the summer’s subway crisis to make its case for the fee. While there has been significant improvements to the MTA's subway system such as countdown clocks with service alerts, the MTA was plagued by delays and disruptions throughout the summer months, beset by crippling maintenance and overcrowding issues and a critical need for funding.

The Fix NYC Advisory Panel highlights a congestion charge in Lower Manhattan as a funding source for mass transit, including subway system infrastructure. The Report indicates that New York City traffic is the second worst among all US cities and the third worst worldwide and is “estimated to cost the New York metro area economy $100 billion over the next five years.”

The Report specifically calls for the improvement of the subway system and outer borough transit access ("Phase One") before implementing any charge zones. The charge would apply to taxis and for-hire vehicles as well as SOVs, and preliminary fee amounts are $11.25 for cars and $25.34 for trucks and commercial vehicles.

The proposal, which requires legislative approval, remains controversial. Advocates cite the benefits of decreased traffic: reduced air pollution, safer streets, and funding for subway improvements and other vita MTA projects, while opponents worry about the impact of a fee on essential travel for those without sufficient public transportation access in the outer boroughs.

New York congestion pricing remains contentious, but other methods that have claimed to reduce traffic - such as rideshare programs - have demonstrated the opposite effect.

Taxi use has declined, but Transportation Network Companies (TNCs) have filled the gap. Total passenger trips via car increased by 15 percent in the CBD from 2013 to 2017. Prioritizing higher efficiency vehicles and shared transportation, like buses, and congestion pricing is a way to target specific gridlock issues such as those resulting from rideshare services, which have decreased transit ridership even as NYC's populations grows.

However, congestion pricing and car bans aren’t the only solution. Better bike infrastructure - making biking quicker than driving, and safer overall - can also shift commuters away from cars. Making sections of cities car-free, charging for vehicle trips, and prioritizing transit improvements are all part of larger movements toward intensive climate change plans and healthier cities.