The Chicago Plan Commission approved the North Branch Industrial Corridor Framework Plan and Design Guidelines (the Framework) in May 2017. The plan will radically transform the large industrial area along the Chicago River between Kinzie Street and Fullerton Avenue, creating opportunities for investment and redevelopment. If fully realized, Chicago’s North Branch Industrial Corridor Framework Plan could dramatically impact the City’s economy in addition to reshaping Chicago’s built environment in industrial areas throughout the city.

In December 2018, the City of Chicago released updates to the North Branch Framework Plan, including plans for the Cortland and Chicago River Tax Increment Financing Redevelopment Project Area (the Project Area) on the city's Near North Side. The proposed district encompasses the "Lincoln Yards" planned development, the first to utilize the Framework. 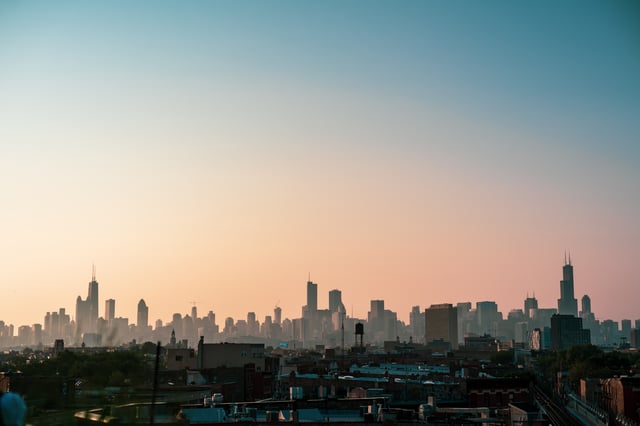 In the spring of 2016, the Chicago Department of Planning and Development (DPD) began an initiative to revitalize the Chicago Industrial Corridors known as the Industrial Corridor Modernization Initiative. With the goal to increase jobs and investment in these areas, the initiative includes a review and update of the City’s zoning policies, and implementation of the plan is ongoing.

The North Branch Industrial Corridor, four miles along the Chicago River, was the first industrial corridor slated for review and includes four PMDs. The site is now home to the first major redevelopment project under the Framework, Lincoln Yards.

The Framework divides the corridor into three subdistricts. The North Sub-Area, between Fullerton and North Avenues, is a mixed use area and includes the now vacated Finkl Steel (Finkl) plant. Finkl originally moved to the location during the early 20th century when it was an ideal place for manufacturing given its proximity to rail and river transportation. The company relocated to a modernized plant on the Chicago’s South Side in 2013. In 2016, Sterling Bay, a Chicago real estate developer, purchased the Finkl site for redevelopment. The former Finkl Steel site is where the $6 billion Lincoln Yards project is now located, a 55 acre mixed-use development of riverfront land along the Chicago River's North Branch.

The Central Sub-Area is largely comprised of Goose Island, an older industrial area located between the Chicago River and the North Branch Canal. Presently, the area is still largely industrial but also includes some offices and utility providers.

The portion of the corridor between Chicago Avenue and Kinzie Street is the South Sub-Area. Located along the Chicago River near downtown, the South Sub-Area includes a former Chicago Tribune printing plant slated for redevelopment. Currently, this zone contains both industrial and office use.

Momentum for Sterling Bay's Lincoln Yards project, located on the former Finkl Steel site along the Chicago River's near north branch, is accelerating. On January 24th, 2019, the project received key initial approval by the Chicago Plan Commission after Sterling Bay revised its plan.

Plans for the site originally called for 13 million square feet of new space, a soccer stadium, and 13 acres of green space, but after community input, the new plan no longer contains the stadium and now includes 21 acres of proposed parkland. The January 2019 revision also includes additional residential units and a lower cap on building height, to better mesh with the surrounding low rise buildings. The plan is the subject of continuing discussion by the community and aldermen on the subject of affordable housing requirements, potential use of Tax Increment Financing (TIF) funds, and density concerns, along with concerns from existing businesses within the community area.

The most recent approved plan divides the development into seven subareas that will be constructed over a period of time. The first phase consists of two buildings - totaling 1.3 million square feet of new office space and over 100,000 square feet of retail - as well as infrastructure improvements and construction of new sections of riverwalk. Future improvements include additional public transportation access via a new Metra (commuter rail) station adjacent to the site, among other infrastructure improvements.

DPD and the Chicago Department of Transportation (CDOT) developed the Framework with stakeholder involvement, and a series of community meetings was held in 2016. A draft of the Framework was made available for public comment in March 2017, and the plan was adopted by the Chicago Plan Commission in May 2017.

To facilitate more diverse development in the North Branch Industrial Corridor, the Framework recommends reducing the amount of land currently subject to the PMD restrictions. The Central Sub-Area containing Goose Island would remain a PMD. The North Sub-Area, including the former Finkl site, would be changed to a Manufacturing (M) district while the South Sub-Area will become a Downtown Service (DS) district.

A Zoning Overlay District will also exist in parts of the corridor to help the transition to new uses. The Framework’s guidelines recommend adjustments to floor area ratios to permit increases in height and density in order to make way for more open spaces. The rezoning would encourage more mixed-use development in some areas but there would still be restrictions on residential development in many portions of the corridor.

The plans also call for steps to improve access to different forms of transportation in order to support workers and residents in the area. The Framework criticizes the current road network and notes that CDOT has already begun studying ways to improve the circulation of traffic in the corridor. Connections to the area could be improved through new bridges for vehicles and removing issues at some of the corridor’s intersections. In general, the existing roads need to be modernized and “smart signals” should be added to better manage traffic.

To reduce the use of cars, the Framework also calls for improved bus transportation and adding comfortable and safe pedestrian and bike paths that connect to transit stations. The Framework proposes studying the feasibility of a north-south transit way that would connect to neighboring areas and transit centers.

The Framework calls for the development of 60 acres of public open space. Given the North Branch Industrial Corridor includes important natural features, such as the Chicago River and North Branch Canal, the Framework suggests the development of open space along these areas. A waterfront 30-foot setback is envisioned to allow for trails and other uses.

Additionally, the Framework recommends the addition of trails that would connect to The 606, Chicago’s new adaptive reuse of the former Bloomingdale Line. The development of 17 acres of wetland parks at various locations, including the North Avenue turning basin, are also outlined in the Framework.

According to Crain’s Chicago Business, several Aldermen have criticized the Framework for not including more open space at time of approval. They sought a public recreational area that is a minimum of 15 acres to be added to the corridor to accommodate various sports activities. The Framework acknowledges these demands and states, “no less than 10 of these 60 acres of open space should be for recreation.”

Funding and Guidelines for Implementation

Sources of funding will be necessary to implement the plans set forth in the Framework. Some revenue will result from redevelopment projects. The Framework suggests a special fee for projects that reduce land in the North Branch Industrial Corridor dedicated to industry. It also recommends two zoning bonus programs to collect funds for improvements in the corridor, the North Branch Floor Area Ratio Bonus and the Neighborhood Opportunity Bonus.

For crucial infrastructure improvements to the North Branch, the City is considering a TIF District for the Cortland/Chicago River area. TIF funds are restricted and can be used for specific eligible costs, including public infrastructure, affordable housing, environmental remediation, and the rehabilitation of existing buildings. The use of TIF funds in the area is limited to public infrastructure.

TIF funds are generated by capturing increasing property taxes, and in order to qualify for funding, an area must qualify as blighted. There has been criticism as to whether or not the area qualifies as blighted and on the potential impact of using TIF funds for construction at the site, which may impact future designation of the Project Area.

It is expected that the Framework will be implemented over the next several decades. Chicago Mayor Emanuel’s press release on the draft plan claims the Framework could “triple the local employment base, create tens of thousands of construction jobs, add several thousand new residents, and generate hundreds of millions of dollars in economic activity.”

We are looking forward to Chicago’s North Branch Industrial Corridor Framework Plan and Design Guideline’s implementation, and are closely watching the progress of the Lincoln Yards development as it is poised to change the city's skyline.