In May 2018, the Denver City Council voted to ban “slot homes” in an unanimous vote. The residential design is an unusual type of multi-family construction, most often featuring two separate structured situated around a narrow driveway, mews, or pedestrian walkway that forms the “slot.”

Though the design bears a passing resemblance to courtyard apartment buildings such as the ones prevalent in Chicago, slot homes are constructed around much narrower space than courtyard buildings with entrances cut off from the street. Though they are prevalent throughout the City of Denver, they are most common in the West Colfax, Jefferson Park, Highland, Five Points, Sunnyside, Berkeley, and Cherry Creek neighborhoods. 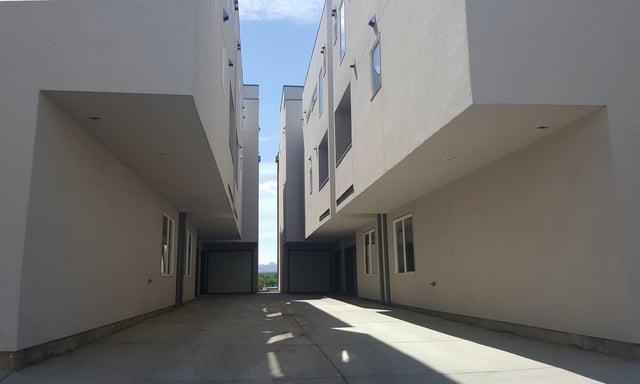 image via CARTA at CU Denver

The City began the Slot Home Evaluation and Text Amendment Project (the Project) in 2016. Prior to creating a text amendment to the City of Denver Zoning Code, any proposed changes must go through an evaluation process consisting of the following steps:

The process involves research, community outreach, analysis, and reporting prior to developing a Zoning Code amendment within the City.

The City of Denver Community Planning and Development Department (CPD) formally defines a slot home as “a multi-unit residential structure consisting of attached dwelling units arranged side-by-side and primarily perpendicular to the street.”

Slot homes may also be called “sideways-facing town homes” or “fraux homes”, and have become increasingly common as a form of residential design throughout Denver. Most structures have individual, direct-access doors that face the interior pedestrian walkway or the side lot line, isolating the entrances from the larger streetscape. They can be constructed as a single row within a block, on a corner or lot, or with center driveways or aisles between smaller structures. Some may have a smaller pedestrian court or mews, while other designs include detached parking.

The design occurs in a variety of zoning districts, including the lower-scale Row House (RH) districts as well as multi-unit (MU) residential districts and mixed-use (MX) districts. They have also been permitted and built under a variety of Zoning Code building forms, including the “Town House, Row House, Garden Court, Apartment, General, and Shopfront forms,” according to the Denver Slot Home Evaluation Problem Identification Report (Report) released by the City.

After identifying the problems posed by the most pervasive slot home designs, the task force began the process creating alternatives, prioritizing effectiveness, equity, flexibility, and predictability. After meeting on 10 separate occasions and including public feedback through community meetings, the CPD proposed a text amendment to the zoning code banning some slot home designs and illustrating design alternatives that address the five major issues above.

City staff estimates that at least 100 slots homes have been constructed since 2010, with the design dating back to the 1970s. The approved amendment bans designs that face away from the sidewalk toward narrow inner courtyards, replacing them with a variety of approved styles depending on zoning district.

For example, the “Existing General or Shopfront Building Form” (common in MX districts) must now face the street without a courtyard, while any side-by-side dwelling units must use the new Town House building form identified in the Slot Home Strategy Overview Report (Overview).

The Overview details the required design changes for each use district, unifying the appearance of some slot homes and providing designs that more closely resemble townhouses and row houses that are pedestrian-focused.

After a revision process, the Denver City Council voted to approve bill #18-0306 on May 7th, 2018 to amend the City of Denver Zoning Code. The text amendment went into effect on May 10th, 2018 and the new standards now apply to all qualifying construction projects as determined by the amendment.

Implications of the Zoning Code Amendment

Though the approved amendment addresses new construction, it does not apply to existing slot homes, and some designs are still acceptable as part of the Garden Court district building forms. Any developments proposed prior to March 14th, 2018, are able to proceed under the previous zoning rules but all subsequent submittals must comply with the new text amendment.

The changes eliminate many of the major issues proposed by slot design, including negative effects on streetscapes and lack of pedestrian access to the front doors of units, but developers view the amendment as a compromise that may further reduce the availability of dwelling units as Denver’s affordable housing crisis continues.

However, the long-term effects of the amendment should contribute to healthier neighborhoods with equitable, human-scaled design by eliminating a pervasive form of isolating design.