International shipping, air transportation, and other subsectors are in high demand, and as “a country develops economically, [the] movement of people and good increases.” Without targeted efforts and special focus on transportation emissions in all forms, Drawdown states that “emissions [could] balloon out of control” and threaten any plan to fight global warming. 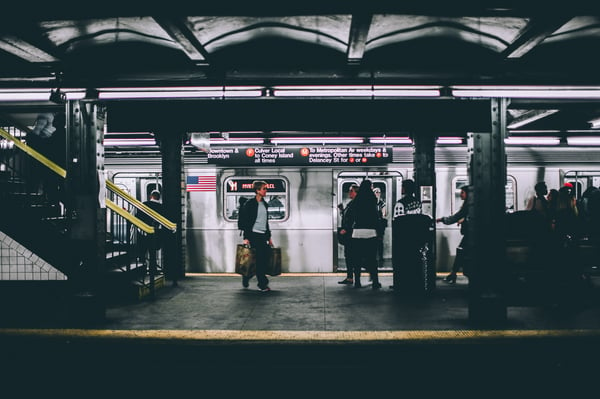 Previously, we covered bike infrastructure, one of the project’s solutions to both public health issues and GHG emissions. Here, we’re taking a look at another transportation facet - mass transit - and how improving public transportation use can reduce emissions on multiple scales.

An Overview of the Transportation Sector

Like many of the other sectors, each facet is interconnected both within the transportation network and to other industries. Ships, trains, and trucks form the Freight group, while ridesharing, walkable cities, mass transit, electric bikes, bike infrastructure, cars, and electric vehicles address urban passenger needs. (Airplanes, high speed rail, and telepresence form the remaining non-urban passenger modes.)

The project defines Urban Passenger Transport (UPT) as “the movement of people within built-up areas, which are often not fully within the administrative limits of a city” and encompasses entire metropolitan areas in its calculations.

By improving and promoting the use of sustainable methods of UPT, demand for polluting modes like car travel directly decrease. Urban trip methods follow this model in particular, and by improving access to public transportation, cities can expect a decrease in car use, furthering the emission reduction benefits.

Defined as “the increased usage of mass transit or public transport to get around cities”, the mass transit solution replaces the use of convention cars entirely. The sector includes bus transportation (BRT), metro rail, commuter rail, tram, and other forms integrated within the urban environment.

The Drawdown scenario projections are based on 36 percent of adoption of mass transit globally and a reduction of up to 17 gigatons from 2020-2050, with the optimum adoption scenario providing a 26 gigaton reduction.

Though mass transit is part of the current urban fabric and it is often the only alternative to private cars, its future is not guaranteed. Despite its prevalence, mass transit use is expected to decline to 21 percent of urban travel share as urban populations become wealthier and prefer car use. Cars remain the majority share in North America and Europe, and in order to fight use, modal shifts must occur.

According to Project Drawdown, the oldest bus rapid transit network, established in Curitiba, Brazil in 1971, is orientated for passenger use similar to a subway or metro transit system. It’s an early example of forward-thinking, sustainable mass transit and prioritizes bus efficiency in what is otherwise often considered the slowest form of public transportation. Shifting mass transit options to more efficient methods such as BRT can improve transit adoption, but the freedom of cars continues to appeal to urban residents and pose challenges for reaching Drawdown’s adoption goal.

Public transportation also provides benefits that stretch beyond reducing GHG emissions, including a narrower footprint (no parking required), more equitable access to city services and resources for those who cannot afford a car, and less traffic congestion. Public health is improved through fewer fatalities from traffic crashes and less air pollution from car exhaust, and walkable cities make residents healthier through exercise.

Though many public transportation systems are embedded within the existing structures of cities, even well-established modes face barriers to use.

First-mile/last-mile challenges (serving commuters with accessible transit for the beginning and ends of their commutes, a challenge addressed by other solutions such as bike transportation), a persistent car culture, and inequitable access to transportation systems fight against the adoption of public transportation. These challenges must be addressed to reach Drawdown’s emissions goal, but they can also be included in urban planning efforts as cities continue to expand.

Simplifying the transportation process by allowing users to use the same payment methods across modes, “redensification” to make transit more attractive than driving a car where space for parking is limited, and providing better access for all can allow for users to use cars less or even forgo them altogether in a way that is attractive, equitable, and accessible.

Many established transit systems, though more extensive than newer networks, struggle with aging infrastructure. The New York City subway continues to be plagued with delays and service disruptions, relying on a signal system that dates to the 1920s and 1930s and railcars that are often at least 40 years old. Much of the subway system lies below the water table, threatening infrastructure with flooding, and track fires from trash often cause disruptions.

Long-term service improvements will require major reconstruction, a process that will take years, and headaches may continue for riders. Delays will push users to other transportation modes - if they have access.

Inequitable access remains a major issue. According to a report released by the Federal Reserve Bank of New York, low-income New Yorkers are more likely to experience significant delays during subway travel due to further commuting distance, neighborhoods without close transit access, and lack of access to alternative modes such as rideshares.

Despite Challenges, Mass Transit Will Grow with Urban Development

The Chicago Infrastructure Trust (CIT) selected the Boring Company to construct the Chicago Express Loop - a high-speed, underground public transportation that promises a 12 minute trip from O’Hare Airport to downtown Chicago. When completed, the Express Loop will complete the trip up to five times faster than current options, including the CTA’s Blue Line. Future Loop and Hyperloop systems promise even more impressive times with less pollution and less disruption than conventional forms of mass transit, but municipalities will also need to adjust to an entirely new transportation mode with far-reaching impacts.