WeWork, the international provider of shared office space, decided to open its first Denver locations in 2016. Obtaining the necessary building permits in Denver can be exceptionally challenging given the incredible demand for permits due to Denver’s recent building boom. Burnham’s Denver office assisted WeWork with navigating Denver Development Services requirements and expedited their Denver permits to keep WeWork’s office buildout on schedule.

WeWork is a New York based company started in 2010 that creates co-working spaces. It currently has 15 shared office spaces throughout the United States as well as locations across the world. WeWork decided to place one of its first Denver offices in the new Triangle Building.

The Triangle Building, located at 16th Street and Wewatta, is part of the Union Station redevelopment project. The 10-story office building is comprised of three glass facades to allow for more window offices than a traditional building. The Triangle Building uses green building design and is seeking a LEED Gold certification. WeWork occupies three floors of this unique building. 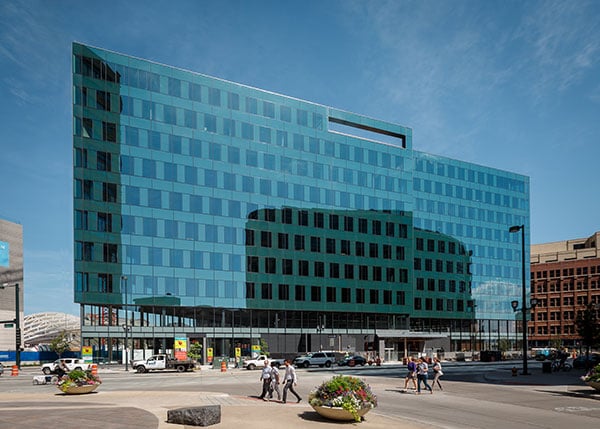 Denver’s population has grown by almost 14 percent since 2010 resulting in a surge in building and urban development. Unfortunately, Denver Development Services, responsible for all building permits, has become overwhelmed by the number of projects requiring review. Although it is taking steps to remedy the situation, Denver Development Services can review a limited number of permits on a daily basis which is resulting in a building permit backlog.

Currently, the only way to have a permit application reviewed the same day is to sign up for a review when Denver Development Service opens first thing in the morning. The day’s slots are usually filled within minutes, if not seconds. If the building plans don’t meet certain department requirements upon submittal, they will be not be accepted. Also, same day review may not be used for larger projects that are over $300,000 in value, require structural work, or need more than 15 minutes for the plan examiner to review. The lengthier log-in review process must be followed which can take a minimum of eight weeks.

WeWork, as a New York-based company using New York and Cleveland architects, was unaware of the lengthy Denver building permit process and had short timelines for getting their office buildout completed. Also, the buildout design called for internal stairs between WeWork’s floors that required cutting out a section of the floor. Structural calculations were required for this staircase design that had the potential to delay the permit approval.

Burnham helped WeWork avoid the lengthy Denver building permit process by working with the City of Denver to develop the Preparatory Demolition and Non-Structural Framing Permit. These types of permits are used in other cities when a space is new and there has not been a prior tenant. However, Denver had no experience with issuing an early demolition and framing permit.

Drawing on its knowledge and experience with building permits across the country, Burnham coordinated meetings between WeWork, the architects, and Denver plan examiners to work out details of this new type of Denver permit. Burnham helped WeWork avoid months of delay by assisting WeWork obtain this expedited permit, and Denver now has an official policy on the Preparatory Demolition and Non-Structural Framing Permits.

WeWork now has a beautiful co-working space in the Triangle Building known as its Union Station location. Burnham also expedited Denver permits for WeWork’s other location in the city, the Lab on 17th Street in the LoHi (Lower Highlands) area. To learn more about Denver building permits read our recent post or Contact Us.