Recent residential high-rise fires are calling attention to sprinkler and other fire safety code requirements in the United States. While the horrific Grenfell Tower fire in London has received a great deal of press, the July Honolulu residential high-rise fire that killed three people is more representative of conditions in many American cities.The 36-floor Marco Polo was built in 1971, predating Honolulu’s 1975 law requiring sprinkler systems. An automatic sprinkler system would have expedited fire extinguishment and prevented the deaths. 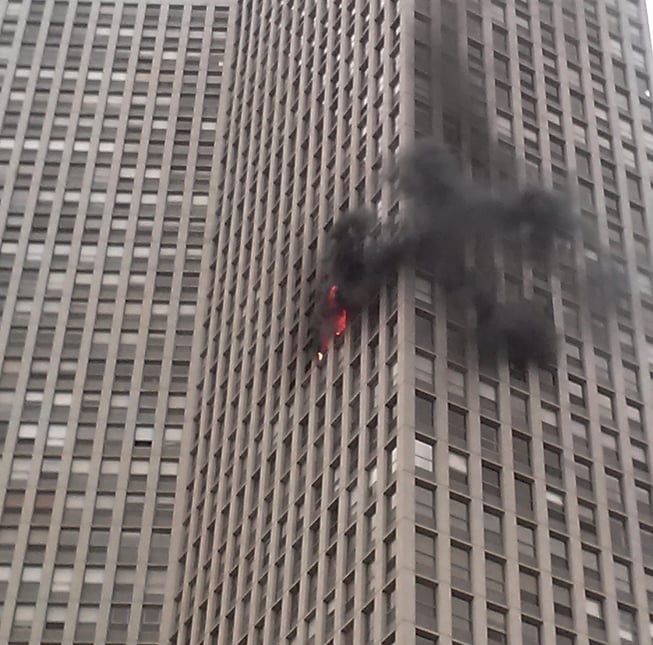 Honolulu’s building code sprinkler requirements are not dissimilar to those of other cities. Older residential high-rises in many parts of the country are not required to have sprinklers. Various interests must be balanced in developing sprinkler and other fire safety code standards. We thought we would review Chicago’s automatic sprinkler requirements for existing high-rise buildings and the history of the current standards.

A fire in the Cook County Administration Building in downtown Chicago took six lives on October 17, 2003. One of the main factors contributing to the tragedy was the lack of sprinklers.The construction of the Cook County Administration Building preceded the Chicago Municipal Code’s requirement that commercial high-rises built after 1975 have sprinklers on every floor. Chicago had largely relied on compartmentalization, the containment of fire in a small portion of a building, to protect against fire in high-rises.

In response to the fire, the Chicago City Council passed a fire safety ordinance in November 2003 that required older buildings over 80 feet to meet new fire safety standards. The ordinance added several sections to Chicago Municipal Code Chapter 13-196, the part of the code stating minimum requirements for existing buildings. The sprinkler system rules were specifically codified at § 13-196-205.

Pursuant to § 13-196-205, all existing commercial buildings over 80 feet were to install an automatic sprinkler system throughout the building. However, the sprinkler requirements for older buildings were phased in. Building owners were required to submit a plan for compliance by September 1, 2005. Sprinkler systems could be installed over time by installing sections of the system in thirds by specified dates, with completion required by January 1, 2017.

Section 13-196-205 exempts a number of different building types from its sprinkler system requirements:

The exemptions essentially limit the automatic sprinkler requirements to all new high-rises built after 1975 and older commercial and transient residential high-rises.

A proposal to require all existing high-rises, including residential, to have automatic sprinkler systems was introduced immediately after the 2003 Chicago fire. However, primarily due to concerns over costs, it was decided that existing high-rise residential buildings would undertake a Life Safety Evaluation instead of being required to install automatic sprinklers. Section 13-196-206 sets forth the standards for these evaluations.

A licensed architect or engineer must perform, sign, and seal the Life Safety Evaluation.The City of Chicago has a Life Safety Evaluation Checklist that must be used and is focused on fire safety measures such as those involving fire containment and ability to combat a fire, means of escape, the ability to communicate with building occupants, and general building fire safety measures. The Life Safety Evaluation requirement is accompanied by other code mandates for existing buildings such as voice communication systems and standards for the materials and installation of retrofitted fire protection systems.

An ordinance was passed in 2012 to improve the Life Safety Evaluation process. The ordinance added provisions requiring a written disclosure statement be made available to building tenants signing a lease or lease renewal as well as those who own units in condominium or condos.

Penalties for violations of the automatic sprinkler and life safety evaluation requirements are set forth at § 13-196-039 as ranging from $1,000 to $2,500 per offense, with each day of the violation regarded as a separate offense. The 2012 amendments raised the penalty amounts to the current levels.

Currently, the Illinois Office of the State Fire Marshall (OSFM) enforces the 2000 edition of National Fire Protection Association (NFPA) 101 - Life Safety Code (LSC). Contrary to popular belief, this version of the LSC does not contain an across-the-board requirement to provide or to retrofit all buildings with automatic sprinklers. In fact, the LSC specifically exempts apartments when an engineered life safety ‘system’ (evaluation) has been approved by the local authority.

However, the OSFM in 2013 introduced amendments to the state rules that would have adopted the 2012 edition of NFPA 101 requiring automatic sprinklers in all high-rises, including existing residential buildings. Chicago arguably could have been subject to these amendments had they become law (the applicability of home rule was debated). When realtors, condominium owners, and Chicago alderman objected to the proposed rule changes, the OSFM withdrew the amendments.