Studio Gang’s Vista Tower (formerly Wanda Vista) surpassed a major construction milestone this summer. As of June, the supertall’s construction team completed the concrete slab for the 50th floor out of the tower’s planned 101 levels. When completed, Vista Tower will be Chicago’s third tallest building at 1,186 feet and follows Studio Gang's Aqua as the firm continues to make its mark on Chicago's skyline. 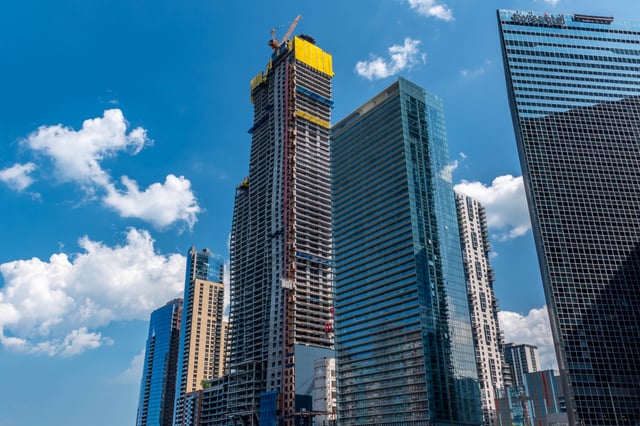 Construction on the tower continues at a rapid pace after the September 2016 groundbreaking. Burnham Nationwide is proud to continue to contribute to the efforts of the construction and design teams by providing permit expediting services and Chicago expertise throughout the process.

An Overview of Vista Tower's Construction

We covered the beginnings of Vista Tower’s construction in a previous post at the start of the full build-out process. In June 2017, the City of Chicago Department of Buildings (DOB) permitted the skyscraper for the full build-out including floors one through 95 following completion of the foundation.

Designed by Jeanne Gang’s Studio Gang in a collaboration with the architect of record, bKL Architecture and developed by Magellan Development Group and Dalian Wanda Group, the tower will house 406 condos and a 192-room five-star hotel on its lower floors. Composed of residential and office uses, the tower will total 1,800,000 square feet and is designed to be LEED Silver certified once completed. The tower is currently slated to reach 1,198 feet and house both condos and and a hotel in its upper floors.

Part of the design involves creating new connections with the surrounding Lakefront East neighborhood. Prior to construction, the section of Lakeshore East on Wacker Drive was adjacent to the Chicago Riverfront Trail and Lake Michigan but was cut off by both Upper Wacker Drive and Harbor Drive.

All work on City property requires a Public Way permit allowing for closures of the public way, including streets and sidewalks. After completion, the new road surface and adjacent sidewalks will provide new pedestrian access to the Chicago Riverwalk and Lakefront Trail and create more flow between the neighborhood and the surrounding park amenities.

Burnham Nationwide has utilized Direct Developer Services for the entirety of the permitting process, including design revisions that arise.

Burnham’s Chicago team permitted the foundation, superstructure, full interior build-out, and additional revisions using Direct Developer Services. An expedited review centered around an assigned single point of contact at the DOB, and streamlined the additional departmental approvals including the Chicago Department of Transportation, the Department of Planning and Development, Office of Underground Coordination (OUC), and the Mayor’s Office for People with Disabilities.

The OUC is responsible for approving all utility work and construction adjacent to the public way during projects with deep excavations including piles and caissons to ensure the stability and preservation of existing infrastructure. Requiring approval by multiple agencies, work on the Vista Tower is now clear to proceed until completion.

At this time, the project team anticipates the final units will be completed in 2020. Roughly 40 percent of all units have been sold according to Magellan Development Group, and the mixed use development remains on schedule at this time.