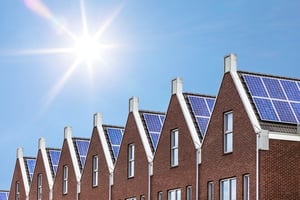 Utility-led community solar is an important example of utility entry into the distributed solar market. Community solar programs have dramatically increased in recent years, and this trend will continue in 2016. Community solar is popular because it provides access to solar for consumers whose living or financial situation does not permit an individually owned solar system. Instead, multiple customers can share in the benefits of a solar installation in their community.

The Rise of Utility-Led Rooftop Solar

Utility-owned residential rooftop solar installations are also becoming an area of utility distributed solar development. These programs are controversial due to concern they may reduce opportunities for solar developers. However, some utilities are finding that rooftop photovoltaic programs are an attractive way to grow their renewable energy capacity, increase revenues, improve grid resiliency, and help customer relations. At the end of 2014, the Arizona Corporation Commission approved the residential rooftop pilot programs of Arizona’s two biggest utilities, Arizona Public Service (APS) and Tucson Electric Power. Under its program, APS provides each customer with a monthly credit on their electric bill in exchange for APS’ use of their roof for its solar panels.

The United State Environmental Protection Agency’s (EPA) August 3, 2015, release of the final rule known as the Clean Power Plan (CPP) is the most significant regulation of power plants in many years. The CPP is a critical example of the way regulations are forcing utilities’ entry into the renewable energy market, and this new rule under Section 111(d) of the Clean Air Act will impact utility-led solar energy programs in 2016 and beyond. The CPP establishes carbon dioxide (CO2) emission rates for power plants and will stimulate greater use of renewable energy. In fact, due to the huge growth in solar and other renewables, EPA’s final rule contains more aggressive goals than the proposed version of the rule.

Right now, states are beginning to meet with utilities, solar energy proponents, and other stakeholders to develop their plans.This activity will continue during 2016. States also have the option of working with other states on multi-state plans.

Given that many states and utilities have already invested in significant solar energy development, it makes sense for states to build on these existing solar programs to reach their CPP goals. This should result in more robust solar programs. Also, the market for solar is still very concentrated in a small number of states. The CPP will encourage the use of solar across the country, and states with a well-developed solar industry will serve as models for other states working on their plans.

EPA has specifically stated that distributed solar may be used by states to reach CPP compliance even though the agency only included utility-scale solar to calculate the renewable energy portion of the CPP’s emission goals. As state plans develop in 2016, we will begin to see the CPP’s impact on utility adoption of distributed solar.

The CPP also jumpstarts the expansion of solar with the proposed Clean Energy Incentive Program (CEIP), a voluntary program providing incentives to states for early investment in solar and other renewable energy, especially low-income community investment. EPA will release the final version of the CEIP in the middle of 2016. States must indicate their desire to participate in CEIP by September 6, 2016, and their final CEIP plan must be submitted to EPA by September 6, 2018. The CEIP is also likely to influence the expansion of utility-led distributed solar.

Additional Changes to Watch in 2016

2016 will be a critical year for utility-led distributed solar. There are many potential legal and regulatory changes, besides ongoing CPP work, that will influence utility decision-making in 2016. State-level policy and regulatory work, such as state renewable portfolio standards and net metering policies, will impact utility investment in distributed solar. Just before the end of 2015, Congress approved the federal Investment Tax Credit’s extension. This major solar financial incentive will assure rooftop solar remains competitive and will place added pressure on utilities to enter the distributed solar market. We at Burnham will continue to stay abreast of significant developments in solar and look forward to keeping you informed in 2016.