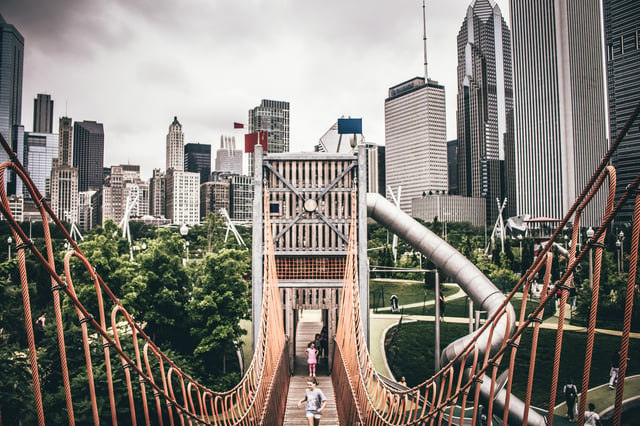 The following highlights some of the important 2018 IECC changes covering commercial buildings that will most likely be adopted in Illinois:

Both the IECC and ASHRAE 90.1 split Illinois into two zones – 4 in the south and 5 in the north. There are a few counties that are misaligned and may be in need of an adjustment by the state.

Section C403.7.6 covers automatic control of heating, ventilation, and air conditioning (HVAC) systems serving guestrooms (a mandatory provision). In Group R-1 buildings containing more than 50 guestrooms, each guestroom must now be provided with local controls or networked guestroom controls (a new definition) complying with the provisions of Sections C403.7.6.1 Temperature Setpoint Controls, and C403.7.6.2 Ventilation Controls. However, hotels are not precluded from having an automatic daily preoccupancy purge cycle.


Throughout Mechanical and Lighting Control Requirements, the phrase “capable of” was replaced with “configured.” The overall intent of this code change was to increase the likelihood that energy savings intended by the IECC will be realized. Much of the savings from energy codes is dependent on the presence and functionality of building controls for HVAC and lighting systems. For example, control equipment can be provided that could be said to be capable of achieving the desired result even though the required software, hardware, and programming is not present and the setpoint is not correct or the programming is not even complete.


Section C403.4.4 expanded the application of variable speed drives in hydronic systems greater than or equal to 300,000 Btu/h (146.5 kW) in design output capacity supplying heated or chilled water to comfort conditioning systems, reducing the threshold where variable flow and variable speed drives (VSD) are required for pumping systems. The pump threshold is now reduced from 10 to 2 hp for continuous operation and time-schedule controlled pumps. Pumps that have operation controlled by direct digital control based on zone demand will result in a varied threshold based on climate zone. Requirements for heating pump VSDs are also added.


Modifications to Sections C405.2.1. Occupant sensor controls and C4052.1.1 establish the application of lighting controls to open plan offices. New language in Section C405.2.1.3 defines the application, applying to function in open office plans > 300 ft that are to be configured to control zones < 600 ft. Controls are based on occupancy of both individual control zones and entire office area.


Section C405.2 Lighting Controls was modified to specifically identify Luminaire Level Lighting Controls (LLLC). It now requires lighting systems be provided with controls that comply with one of the following:


The purpose of this code change is to acknowledge lighting control technology that meets the intent of the provisions of the IECC if the technology has specific capabilities. LLLC refers to a lighting control solution where each luminaire in a space has independence from every other and can, therefore, maximize incremental control within very small areas.


Table C405.3.2(1) was modified throughout to reduce watts/ft. Sample changes are noted below.


Other Fixes and Reorganizations


There was a complete restructuring of HVAC provisions, grouping categories of provisions together. In addition, three important changes corrected the code to reflect original intentions.


The Illinois Energy Code Advisory Council, charged with overseeing changes to the Illinois code, could delete or modify any or all of these modifications in the coming months. If past history is any clue, you can safely assume that in all likelihood these changes will be part of the new Illinois Energy Code in 2019. In an upcoming post, we will cover the changes to International Energy Conservation Code’s residential provisions in the 2018 edition.