The City of Chicago’s downtown core and nearby neighborhoods are growing, and BOMA/Chicago and JLL Chicago Research’s 2017 Economic Impact Study (the Study) details the present and future impact of the trend on the city’s office and commercial buildings. Also undertaken in 2006 and 2012, the Study is a comprehensive look at the City of Chicago’s commercial growth and forecasts the needs and expectations of future tenants.

BOMA/Chicago’s excellent panel on the report illuminated the Study’s findings and provided insight on current trends in office leasing, job growth, and construction. BOMA/Chicago building membership is composed of 165.8 million square feet of space across 235 buildings and forms 98 percent of all Class A office buildings and 80 percent of all rentable office space. 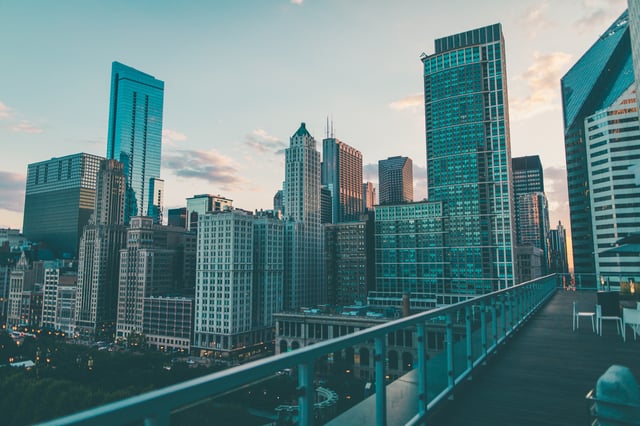 A significant decrease in the downtown core office vacancy is a key finding. As of December 2016, downtown vacancy rates were at 10.3 percent, down 5.5 percent from the 2012 Study. Overall rental rates increased 23.5 percent in the same timeframe to an average of $38.20/sqft. Rent increases follow a 34.4 percent increase in operating expenses, a trend in comparable cities as well.

The Kennedy West (River West, Fulton Market, and Far West Loop) market’s growth continues, with an influx of new retail, multi-family, and office buildings. Much of this growth - and Chicago’s overall job growth - is in the information sector, with high-tech jobs forming an increasing part of Chicago’s job makeup. However, the City’s economy remains highly diverse, with “no single industry employ[ing] more than 20 percent of the total workforce” according to data from the U.S. Bureau of Labor Statistics as of December 2016. This diversity helps the Chicago job outlook remain stable overall and reduce rental uncertainty.

The Study demonstrated that BOMA/Chicago member buildings, and Chicago office space as a whole, prioritizes sustainable improvements. In a separate study by CBRE, the 2017 National Green Building Adoption Index, Chicago leads the country in green building practices with 66 percent of building square footage and 20.2 percent of buildings LEED and/or Energy Star certified.

The panel discussion confirmed that not only is new construction actively seeking certifications, but there is increased retrofitting of older spaces with green technology, reflected in the success of programs such as Retrofit Chicago that incentivize energy efficient upgrades to existing buildings.

Building on a trend that began prior to 2010, corporate headquarters continue to relocate to the CBD, including emerging districts such as the Far West Loop and Fulton Market.

From 2012 to 2016, 75 suburban companies have relocated to downtown buildings, 59 of which relocated to BOMA/Chicago buildings. Additionally, the Study found that the number of Fortune 500 companies  located in Chicago doubled since 2012, with 12 headquarters located within the City limits.

The Fulton Market district has become a magnet for relocations and new headquarters, currently home to Google’s Midwestern headquarters and Skender Construction, as well as the future home of McDonald’s corporate headquarters pending a relocation from suburban Oak Brook, IL. The corporate move is expect to spur additional moves by other companies.

According to panelist Todd Lippman, Vice Chairman, CBRE, McDonald’s sought out the Fulton Market district in order to attract a larger talent base and transform company culture, specifically searching for a location that was not in a high rise building.

Jack McKinney, Vice Chairman, Cushman & Wakefield remarked on the trend: demand has increased throughout the city for atypical office locations in a move away from trophy new construction. Tenants place priority on amenities, creating a demand for more open layouts that can support amenities and perform branding functions for companies. Retrofitting existing office space also reflects this trend, where more space is allocated for amenities and internal placemaking.

However, increasing construction costs and rents continue to impact tenants, leading to downsizing. Chicago law tenants in particular are relocating to smaller offices with more collaborative space and amenities, which increases vacancy rates as they leave behind larger facilities.

With increased operating expenses leading to higher rents and an increase in construction costs, the Study reveals some vulnerabilities in tenant retention and construction. However, the City of Chicago continues to draw new investment and development and has established itself as both a tech hub and destination for major companies, with trends that promise to lead to further development in the downtown core and beyond.