The City of Hoboken, New Jersey is in the process of building a microgrid. The impetus for the microgrid was the city’s extensive flooding and major power outage caused by Hurricane Sandy. Hoboken is undertaking a variety of initiatives to build a more resilient city. In a recent post, we discussed Hoboken’s new Resilient Building Design Guidelines intended to help the city flood-proof its buildings. The Hoboken microgrid plans include distributed solar as an option and support the creation of a more reliable energy distribution system for the city. 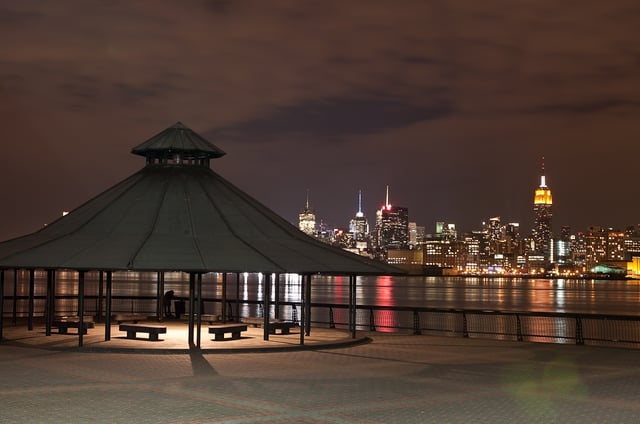 What is a Microgrid?

Microgrids are jointly controlled electrical loads that can operate connected to the larger electrical grid or function autonomously from the grid. A major benefit of a microgrid is its ability to disconnect from the grid and continue to provide energy to facilities on the microgrid if there is an outage of the grid, such as during an extreme weather event. Microgrids can also offer other benefits such as serving as a way to moderate electricity fluctuations and incorporate renewable energy sources into the energy distribution system.

Usually, microgrids use a variety of distributed energy resources, such as rooftop solar and wind turbines, and include some type of energy storage and smart technology. Throughout the country, there are initiatives to incorporate microgrids into energy planning. For example, Commonwealth Edison, Illinois’ largest utility, is building a microgrid in the Bronzeville neighborhood of Chicago that combines solar power and battery storage.

Why Does Hoboken Need a Microgrid?

Most of Hoboken flooded after Hurricane Sandy, including the city’s electrical substations. The majority of the city’s residents were without electricity, and it took several weeks to restore power to some parts of Hoboken. The lack of electricity affected the city’s ability to dispatch emergency services, and some critical facilities, such as buildings housing seniors, were without power. Given Hoboken’s location at low ground elevation next to the Hudson River, future flooding is likely.

The city realized it was necessary to create an electricity distribution system that can continue to provide electricity to critical infrastructure in the event of future storms. Also, Hoboken is tied to New Jersey’s aging electrical grid which can create reliability issues independent of any storms. A microgrid would improve Hoboken’s ability to provide an energy alternative anytime the grid is compromised.

What are Hoboken’s Plans for a Microgrid?

Hoboken worked with the U.S. Department of Energy (DOE), Sandia National Laboratories (SNL), the utility PSE&G, and the New Jersey Board of Public Utilities on a plan for the microgrid. SNL released a preliminary design in September 2014. The recommended microgrid would be designed to support critical infrastructure during the loss of power from the grid. The city initially selected 55 buildings, such as police and fire department facilities, pump stations, medical facilities and pharmacies, groceries, shelters, parking garages, and affordable and senior housing, to be connected to the microgrid. However, SNL’s report also considered the cost of supporting a smaller number of buildings.

The microgrid design would contain a number of options for electricity generation. It considers renewable energy sources, such solar panels, and natural gas generators. SNL’s report proposes the use of some natural gas generators that would simultaneously produce heat and electricity, known as combined heat and power. The combined heat and power sources can reduce the cost of both electricity and gas as well diminish energy consumption and greenhouse gas emissions.

Building the microgrid would require the city to obtain new equipment for monitoring and controlling the microgrid as well additional transformers. The plan envisions multiple places where the electric load could be switched between the Hoboken microgrid and utility feed. New underground feeders would be required to avoid back feeding to the utility’s equipment when the microgrid is in operation.

Use of the microgrid in island mode would only take place after power from the utility has been off for a significant period of time. This recommendation is intended to prevent the microgrid from starting up and disconnecting from the grid when it is unnecessary. Some of the microgrid’s power generation sources would be phased in during an outage of the grid in order to avoid disturbing some critical loads that are already operating.

It is recommended that some of the proposed microgrid’s electricity generation capability, such as a combined heat and power unit, operate on an ongoing basis as a less expensive alternative to the energy provided by the utility. To prevent or minimize a cyber attack, the report also recommends cybersecurity measures for the microgrid, including control system segmentation.

What is the Current Status of the Hoboken Microgrid?

The extent to which the Hoboken will be able to fully develop the microgrid will depend on the city’s ability to find funding for the project through grants and subsidies. The city has already installed some sources of natural gas generation for the microgrid and is hoping to also install solar and battery storage once it has sufficient funding.

Hoboken is currently working on installing a conduit for the microgrid beneath Hoboken’s Washington Street, located in the city’s central business district. This project is part of several improvements being made to Washington Street. However, funding is still needed for other components of the microgrid project, such as transformers and facility interconnections.

In addition to its own microgrid, Hoboken should also benefit for NJ Transit’s planned microgrid called NJ TransitGrid. In response to Hurricane Sandy, NJ Transit, the state-owned public transportation system, is also undertaking the development of a microgrid for some of its rail infrastructure. We are looking forward to watching the progress of both the Hoboken microgrid and NJ TransitGrid.