Nationwide Efforts to Use Density Bonuses

Examples of national efforts using zoning flexibility to foster the development of affordable housing are New York City’s recent dramatic changes to its zoning laws and the Obama Administration’s 2016 release of the Housing Development Toolkit containing various strategies for states and local jurisdictions.

The amount of the density bonus granted, capped at a 35 % increase, is dependent on a project’s percentage of affordable units and the income level targeted. The state law mandates that if affordable units are being built, local requirements for height and floor area ratio be automatically adjusted to allow for greater density.

While the California Density Bonus Law has existed since 1979, it has undergone various updates. Most recently, four statutes were adopted that amended the density bonus program’s requirements and went into effect in 2017. Included in the amendments’ changes are: (1) a requirement that local jurisdictions state a timeline and procedure for processing density bonus applications; (2) a clarification that mixed use developments are eligible for the density program; (3) the creation of a presumption that incentives and concessions will be granted unless a local jurisdiction provides certain evidence; and (4) a requirement that local jurisdictions approve specified bonuses for commercial developments that partner with affordable housing developers. 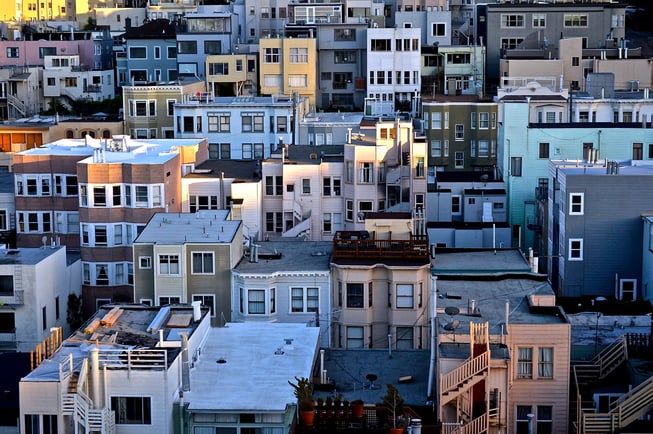 Developers’ use of density bonuses in San Francisco were limited, until recently, by the San Francisco Inclusionary Housing Program. Under the program, developers of housing with ten units or more were required to pay an Affordable Housing Fee or provide a mandated percentage of affordable housing units.The San Francisco Inclusionary Housing Ordinance affordable housing units were deducted from those included in calculating the density bonus percentage, thereby reducing the bonus.

The San Francisco Planning Department created design guidelines for projects that participate in the 100% Affordable Housing Bonus Program, in part, to assure that the taller buildings will fit within the surrounding neighborhood.

This month, the San Francisco Planning Code Section 206 was further amended to add three new programs with different density bonus options and zoning changes to encourage the development of affordable housing. The three new programs are:

The Home-SF Program is designed to also provide housing for middle-income households and allows a density bonus for housing developers who set aside at least 30% of the project’s units for below market rates. The program specifies the percentage of units that must be available for low-, moderate-, and middle-income households. Such projects can receive bonuses for form based density, height of up to two additional floors (20 additional feet), and ground floor ceiling height of up to five feet. In addition, eligible projects may choose up to three zoning modification options from those specified in the code.

The program also contains requirements for the size of the units that must be provided, and as one option, at least 40% of the units must have two or three bedrooms (at least 10% three bedrooms). The Home-SF Program is not available in RH-1 or RH-2 Zoning Districts and must satisfy an environmental review. A project eligible for the Home-SF Program also may not “demolish, remove, or convert any residential units.”

Both the 100% Affordable Housing and the Home-SF Programs are San Francisco specific programs; and therefore, do not implement the California Density Bonus Law.

The San Francisco Analyzed State Density Bonus Program provides an expedited approval process for projects that seek a density bonus that is consistent with the California Density Bonus Law and wish to choose from a menu of pre-approved San Francisco “incentives, concessions, and waivers.” The program can only be used in certain specified San Francisco zoning districts. To be eligible, a project cannot remove any current residential units.

This program is for projects that comply with the state density bonus law but don’t use the pre-approved San Francisco incentive options. Developers may request other incentives but their projects are subject to individual review. However, the Individually Requested State Density Bonus Program allows for more zoning district options than the Analyzed State Density Bonus Program.

Time will tell whether the new San Francisco density bonus programs will provide the necessary incentives to encourage the development of more affordable housing. It is expected that it will take several decades for the goals of the density bonus programs to be fully realized. Other cities struggling with a shortage of affordable housing are likely to watch how the new San Francisco programs are implemented.