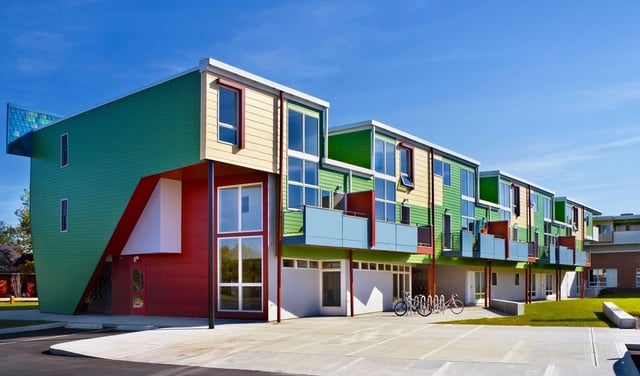 Barriers to Housing Development Reduce the Availability of Affordable Housing

Many areas of the country have an undersupply of affordable housing. This is particularly true in municipalities seeing a surge in population growth that is causing a shortage of housing. In addition to a housing shortfall, housing costs in many of the nation’s cities outpace wages. Yet, numerous states and local jurisdictions are relying on outdated housing regulations that create barriers to housing development, in particular, the construction of affordable housing.

The actions taken by New York City and other municipalities to update their zoning regulations and building codes to increase affordable housing availability can serve as examples for other jurisdictions struggling with similar issues.

The Toolkit provides a variety of actions states and local jurisdictions may take to foster affordable housing development.

Re-designing some local requirements to be more flexible, such those governing density and building heights, will allow developers to avoid applying for variances or seeking rezoning. Usually, the review process for variances and rezoning is lengthy and expensive, and developers are less liable to take on these additional costs and risks for affordable housing.

Vacant property is an unrealized opportunity for the development of affordable housing and also reduces the quality and property value of the surrounding area. In addition, vacant property is problematic because the cost of maintaining abandoned property is born by the local municipality.

To remedy these problems, the Handbook notes that some cities have adopted ordinances requiring owners to register their vacant property and pay a fee. Sometimes this fee increases with the amount of time the property remains unused to incentivize the property’s redevelopment. Another option is to donate tax-delinquent or abandoned property to a nonprofit for redevelopment as affordable housing.

Zoning changes that permit higher-density development, particularly in transit zones, can create more affordable options in heavily populated urban areas. Another option used by some municipalities is a zoning requirement that a certain percentage of the units in a new residential development qualify as affordable housing.

Use Density Bonuses and Tax Incentives

Zoning laws can be crafted to incentivize the inclusion of affordable housing. For example, a zoning ordinance can permit a developer to build more units than otherwise allowed if the developer includes affordable housing units, known as a density bonus.

Similarly, tax incentives can be used to encourage affordable housing development. For example, property owners and developers may be granted a property tax exemption or abatement for developing or renting units set aside as low-income housing.

The Handbook notes that many municipalities don’t make the most of available newer technology that could help improve the permitting processes. As permit expediters, we frequently see the difference a streamlined process can make for our clients.

In addition to enacting ordinances that remove barriers to affordable housing, New York City has been making important changes to create a more efficient permit and inspection process. For example, New York City is currently moving to a completely digital system for processing permits and inspections, known as DOB Now.

We are anxious to see how many states and municipalities follow the recommendations contained in the Housing Development Toolkit. To encourage change, $300 million in U. S. Department of Housing and Urban Development grants will be available during fiscal year 2017 to municipalities revising their regulatory approach to housing.